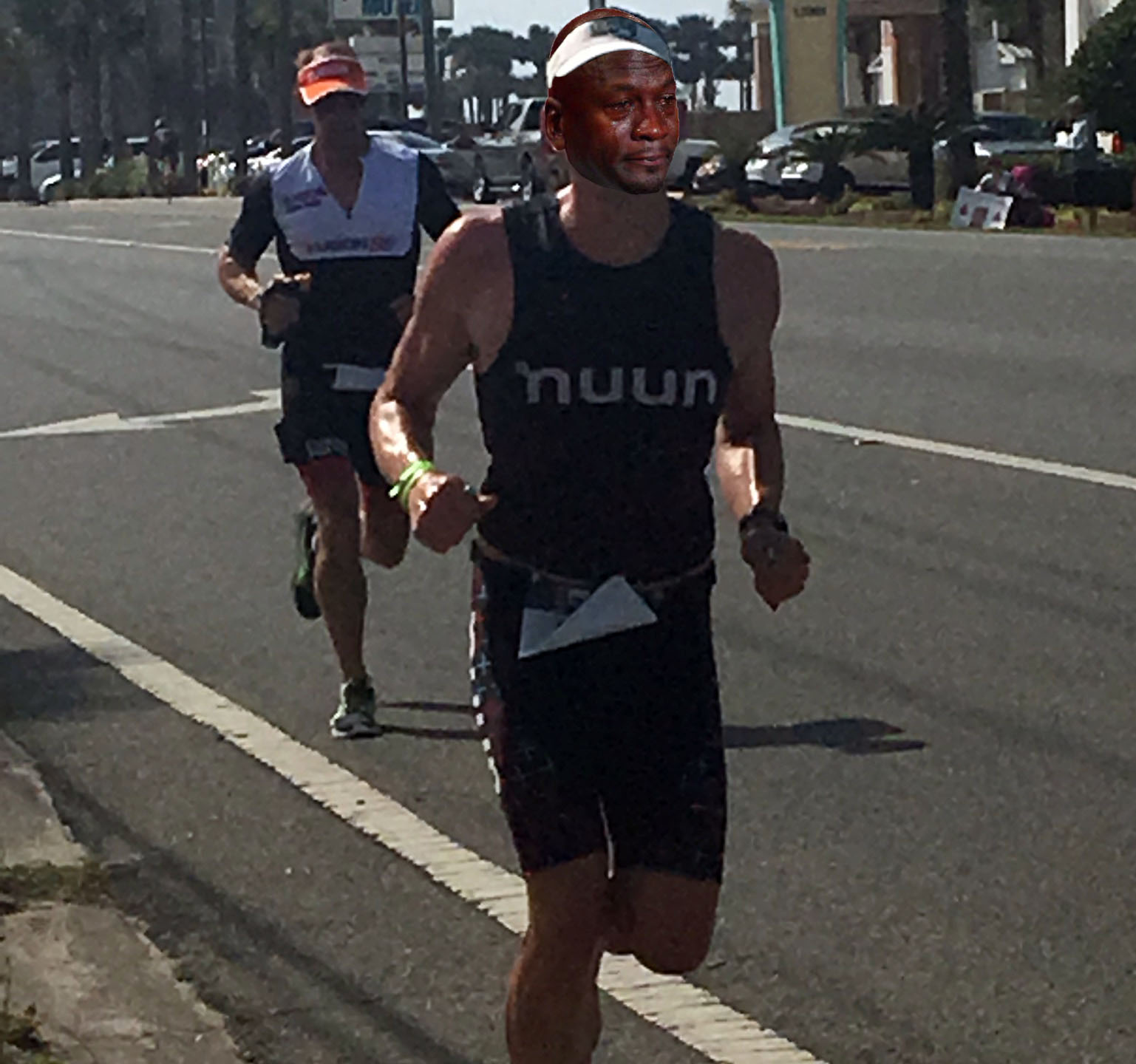 I actually had this race circled on my calendar long before Ironman bought it. Why? Because it was a good price compared to the usual gouging I experience when signing up. You know how it is when they buy a race, at least it wasn’t a $150 price hike like the Beach2Battleship half.

If you’re looking for a TL;DR, don’t sign up for this race because the swim has a track record of getting cancelled nearly every year (as we were told by some locals).

The drive down to PCB is scenic—there’s no direct route there unless you can get on I-10. The highway into town is part of the bike course so you’ll have a decent course preview if you’re coming from the north.

We stayed at the same hotel as the last time when we were here for D’s marathon. It’s not shabby, but a lot of the joints around here do the bare minimum because your main clientele is the college spring breaker with barely enough money to buy a dime bag…so basically the logic is they don’t need nice things. It’s pretty sound thinking, I wouldn’t give 21 year old me nice things either.

Athlete check-in and the athlete village were in the Panama City Beach apartment complex that locals may define as swanky. The only perk that is useful to being an All World Athlete is the priority check-in line because it saves a good amount of time. However, the Ironman swag sucked donkey balls as is the typical fashion for the last year or so. I got another backpack…a small, over-the-shoulder single strapped bag that is way too small for a grown man…so D got herself a new bag. We stopped at the Normatec tent to chill out in the boots. There was really nothing else there. You’d never know the sponsor of this race was Pepsi, but based on how it was run they should approach Faygo next year.

They have First Watch down here, so that was breakfast after checking in. The croque madame is the shit—you need to go try it while you can because it’s seasonal. We hung out on the beach later on which gave me a chance to give the swim a trial run. The surf was pretty rough, but it’s not the worst I’ve ever been in. Ocean swims are why you need to learn how to do dolphin dives—just be cognizant of the location of sand bars so you don’t break your neck. Even with the current conditions and six beers I had an easy 1:05/100 yard pace; I thought I was going to smash that shit Saturday morning. However, the forecast was for thunderstorms, and I’ve learned a thing or two over the years.

First of all, New Orleans to the Florida panhandle always seems to have rolling thunderstorms when it starts warming up. Next, storms always kick up the surf no matter where you’re at. So the question was how bad would it be in the morning?

Luckily the storms rolled through quicker than forecasted. I expected they would because there was no way it’d blow up like the future radar proclaimed. First thing I did at 2:30 am was scope out the view from my balcony. There was only one red flag, but the Weather Channel had a riptide warning out. I could tell by the wave breaks there would be no swim. See, the unfortunate thing is you need to consider the weakest swimmer (you know the ones deserving of a Darwin Award for picking a swim with this level of difficulty when they know they’re going to barely complete it in time under flat water conditions) and make your decision. Meanwhile your strong swimmers get hosed because they can handle surf short of hurricane storm surge. Hell I had to battle six to ten foot waves for 2.4 miles in Lake Erie after a storm passed through overnight and still was under an hour. This makes back to back races where Ironman took away the weapon I had in a triathlon. I wasn’t mad because I just went through this seven months ago. I did want to take the wallets of the Ironman staff so they could sympathize with being robbed though. D later said she was told this race almost always has its swim cancelled and only had it once in four years. Go figure it was the year I looked up too.

Here I was all shaved and tapered like the good old days and I had no swim. I also had no toenail because one fell off that morning. At least I didn’t put my fingers through my wetsuit, which I’ll probably stop wearing because it holds me back in the long run. No swim means we’re back to the anticlimactic time trial start, but at least I had a low number this time.

You hop on the bike and immediately go over a narrow pedestrian bridge that ends in a hard right turn. There’s a few sets of speed bumps immediately after until you exit the complex. I found it best to go over them by going over the low spot in the middle. It’s not easy to make unless you’re going slow. The course was also modified to avoid unfinished road construction by making it dog leg around an intersection. Here is your wind advisory: roads parallel to the shore (east-west) you’ll be blasted with crosswinds, anything headed north is a tailwind, anything south is a headwind. I wouldn’t advise a disc for this race. Your crosswinds are only for about 11 miles of riding. There is also a bridge with a long gradual climb at mile 10.5 (don’t forget you’ll come back over this). Other than that it’s nothing exciting, just a bunch of trees and not much elevation change. With the tailwinds I was averaging 30+ mph, with the headwinds it was about 20 mph, and with the crosswinds I averaged 23 mph. All along Highway 79 there are gouges in the asphalt like someone drove on it with a bare rim in some Florida Man police chase you probably read about last week. You should try your best to avoid those, but they come up fast. The white line also has several segments with reflectors built in and were painted over so they blend in. If you wonder why I mentioned that it’s because riding on the painted white line offers less rolling resistance than on straight asphalt, but the flip side is its slicker when wet.

Ah let the fun begin. As I made my right turn off Front Shore Drive I was immediately met with a gaggle of volunteers…half pointing left and half pointing right. These were two quick turns and here I have the dogs from the Goodfellas painting looking at me like “one dog goes one way and the other goes the other way” and I’m on my bike saying “Whaddya want from me?” This forced me into an immediate dead stop. At that moment I had the right foot out of the shoe and my left foot unstrapped but still in my shoe. My chances of dismounting cleanly were not very good and if I fell I’d likely break the ankle of the foot still partially in the shoe. I was lucky enough to be able to click out of that pedal. I had some choice words for the volunteers about their directions as I ran to the dismount line.

The run was miserable. It must have been 90 degrees and 100% humidity at 9 am. First 4-5 miles were fine but I was getting thoroughly cooked. Danielle was camped out on the run course at a street that was short and cut through to the other side. I had a decent amount of gas in the tank when I rolled up on her in my first loop (video). My heart rate had skyrocketed and at one point it hit 213. I saw it get into the 200s a few times that day, but I could never be sure if it was legit or a glitch because it was so damn hot and I thought I was going to die. I had to walk part of the shaded aid station at mile 8 so my heart rate could come back to earth, but it was short-lived. Oh, there’s no flat Coke at the aid stations, this time you’ll get nasty flat Pepsi…if you’re brave. I used so many sponges and cups of cold water on myself I ended up drenching my shoes and had minor blistering. I really didn’t care much about the race since I had no swim, but I wanted to make sure I didn’t pass out on the course. The backside of the run loop is pretty desolate (everyone seems to hang out on Front Beach Road), but I always knew Danielle would be there each time around even if no one else was (video). I hauled ass over the pedestrian bridge and rounded the corner to head to the finish (video). I saw D watching on with her huge smile as she waited on the corner where the finishing chute started (video).

An ongoing issue at this race was the lack of volunteers. I know paying people violates the underpants gnomes’ equation that WTC lives by, but they need to take a bite here and just eat it. I guess that even extends to paid traffic cops too? My girlfriend as well as other spectators had to step in and do traffic control on the bike and run course. A 3-loop run course is supposed to make that aspect easier. Those people were there to watch—if they wanted to actually volunteer they would have done so formally. She said she almost had to hop into action because of the condition of some of the athletes on the run course since there was no presence of a medical staff on the course (and being an athletic trainer she’d know what to do).

The Nuun race kit was tight, literally and figuratively. I had a few problems with it though. Once the clothing was drenched my HR monitor slid down habitually despite having a good fit overall. It was one of those unknowns you come across because I never trained in it soaking wet. Pactimo jerseys do tend ride their way up on runs. I would have preferred to have a zipper because in the brutal heat it would have aided in thermoregulation.

At least the massages we’re good. Everything else…not so much. All the food except fruit and pretzels were not free. They had one guy working the keg and I was limited to two beers…sorry man you’re trying to limit the wrong guy. I’ve managed to live with this company being cheap and skimping everywhere else recently, but after this race I expect the Golden Corral treatment with regards to your alcohol.

If the swim gets cancelled consistently I see this race falling by the wayside. It won’t hurt WTC in the long run and it’s not the first time they’ll have basically bought the rights to a race so it’s no longer held. I don’t plan on returning for this or coming back for Ironman Florida in the fall as well; I’m just not willing to chance losing a leg of the race on another ocean swim any time soon.