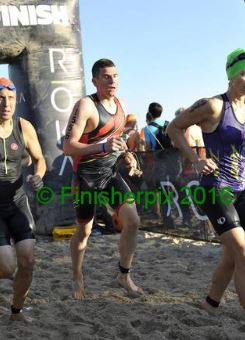 I picked this race for a few different reasons, but the main two were that it’d give me something to do while I visited my friends & family in the Midwest and I could use it as a tune-up for Ironman Maryland in October. Also, as a small goal I’m trying to do at least a half in each of the Great Lakes…so two down, three to go.

Originally I was not going to taper for this race because it was supposed to be a tune-up, but when family and friends decided they’d like to come watch I figured I better do something so it’s not a complete shit show out there.

What I came up with was a nine day mini-taper. I wanted to keep my training time up to be consistent with my Ironman plan, so I front-loaded the first four days of the first week. I took Friday off (first day off in five weeks), had an easy brick workout Saturday and then took Sunday off. I figured those two rest days would help give me my legs back. The following week I had to workout my training between Atlanta, Ohio & Ann Arbor.

This year I drove home instead of flying, which made bike logistics a lot less stressful on me since I didn’t have to worry about Southwest losing my bike again. The drive always sucks, and this year was probably worse than years past. Unfortunately, my Monte Carlo does not have working air conditioning. It’s a pain in the ass, but for those long drives I just put on a sun sleeve, roll the windows down and turn the stereo up. The Lonely Island seems appropriate because this car is a boat; it’s just missing T-Pain riding shotgun for the trip. Also, my cigarette lighters have a short in the wiring. That meant I couldn’t charge my phone or GPS the whole trip. I ended up using my laptop to charge my phone and play music when I got sick of listening to country stations. It was truly a ghetto fabulous set up, but hey it worked out for me so I can’t complain about that. The drive across Michigan is kinda boring because all you’ll see is billboards for cherries and Indian casinos.

The first order of business upon my arrival on site was to head to the wheel rentals. My rear wheel was jacked up and completely non-functional, so this was going to be the only way I could race the following day. They only had disc wheels left, so I guess this will be a first for me. Once I had that straightened out I went through check-in and everything else. It’s best for you to be at the Athlete Village before 11 a.m. because it just exploded after that. The swag was okay, I probably have about 50 Clif Bars in one of my bags. The rest of the Athlete Village wasn’t anything special and I tend to skip the athlete meetings these days.

By the way, the Benton Harbor/St. Joseph area is like walking into the past. I had to run to the grocery store to get beer and wine. If you’ve never had cherry wine you should know it has an almond-like finish. Anyway, the grocery store had design features you only saw in the 1970s and 1980s. To further the rift in time there was an operating Family video across the street. I was pretty sure those went out of business quite a few years ago.

Benton Harbor is a small town that is about to get swamped with 2,000+ triathletes and their families. Be prepared for the town restaurants to be packed. If you’re looking for something to do go to a winery (or maybe an Indian Casino). You’re in cherry country so it can be fun.

This was probably some of the best weather I had for a race. There was a little bit of overcast and it didn’t really get hot until later in the day. I was told this was the first time this race ever ended up being non-wetsuit legal. The water temperature the morning of was just over 76 degrees Fahrenheit. I was kind of on Greek time for part of this vacation, so I dragged ass in getting over to transition in the morning. It left me with about 15 minutes to set everything up before transition closed. By the way, race morning plan on having to park far from transition due to minimal parking nearby. Don’t worry, they have shuttles going from the Whirlpool campus to transition.

After transition closed I waited around for a good hour before my wave went. I was the twelfth wave to start, so I spent the entire swim going through people. It wasn’t a particularly great swim either. I was about two minutes slower than I expected, but everyone else was kind of in the same boat even though the conditions were about as good as you could get for a Great Lake (there will be some chop no matter what). I figure part of that came from the first third of race where I had to run into the waves and then fought through them to get to the deeper water. I did manage to gauge my speed just right to ride a wave into shore.

Between the water and transition is an uphill run on the beach. It isn’t particularly fun because you can’t get great footing and you slide a little with each step you take. Plus, it’s sand…so it gets everywhere in your transition area. I tried my best to wipe off as much as I could with a hand towel I took from the hotel before getting my cycling shoes on. If you race here a good way to remember where your bike is located is by counting the port-a-potties or using duct tape to mark an “X” on the ground so you don’t run past it.

Overall the bike wasn’t too bad of an experience and my time was the fastest split I ever put up. The roads were much better than I expected them to be considering this race was in the Snow Belt. It gets pretty scenic once you divert from the main highway, but overall I found it pretty fast. If you look at the course on a map, the distance between each turn is deceiving; they’re a lot more spread out so you get back up to full speed for a while before you need to make another turn. The other deceiving issue with the course map is how close the highway is that runs parallel to the lake. You’re never that close to it, so don’t be expecting a picturesque view on your ride because you won’t see Lake Michigan until there’s a mile to go. I should note that the Ironman page for Steelhead says you’ll be riding through “wine country.” You may be in wine country, but you aren’t going to see a single vineyard on this course.

Coming into T2 gets kind of tight. That last mile or so is on a sidewalk which transitions into an uneven wooden boardwalk. There’s no passing so you’re locked into your positions. It made for a congested bike dismount area, but since I did a flying dismount I just road the side of my bike to the line and hopped off.

The run was kind of boring for me. It was two loops and a good part of it goes through Whirlpool’s campus on some kind of narrow asphalt walking path. It felt like just another case where the WTC was trying to maximize profits by limiting how much traffic control they needed to pay for. There were fewer aide stations compared to other 70.3 races I’ve done. There wasn’t any ice nor cold sponges and 2/3 of the time I was given water it was piss warm. Note to the readers: the only real hill there is on the run course is at the end of mile one, otherwise the course is flat. At least you can get that hill over with right at the start. Plus you get to come down that hill at the end of the race. I put up a pretty good run split, and of course it would have been faster had I not did a tiny bit of walking. There’s plenty of spectators to keep you going.

Pizza Hut was the post-race food and I probably ate a whole pizza before leaving. Had I not wanted to go back to my friend’s place and relax I would have chilled out on the beach for a little while. I was glad I stayed the night at her place in lieu of driving back right after the race.

I had done about 3,000 miles of driving in a five day span, so by the time I got back to Atlanta I felt like I’d been hit by a mini-van. The drive back sucked just as much as the drive up. Every time it started to rain I had to roll up the windows and roast. I really need to get rid of that damn car.

I just never managed to really get into this race. The wave start had killed the little drive I had built up. The waiting felt like it dragged on and by the time it was my turn to go, it felt like, “Well, let’s just get this shit over with so I can get back to my own bed as soon as possible.” About 40 miles into the bike I started thinking, “Man, I’m kinda bored right now.” Maybe some of it had to do with how crappy the vacation had been going and I wasn’t in the best mood, but I was never in that locked-in zone at any point that day. It wasn’t a bad performance though because I shaved a few minutes off of my PR.

As for a benchmark for Ironman Maryland…I think Steelhead will be very similar in each of the three sports. I know I can go sub-50 in a 2.4 mile swim based on my Chattanooga Rat Race in June, but I think even with the best conditions in the Choptank River going sub-60 might be a tall order. The bike and run courses will likely be very similar as well. With the bike I’ll probably be looking at a bunch of trees like when I did that race in Tallahassee. On the run I’ll probably get bored because it’s essentially 2-1/2 “loops” on a U-shape course…so that’s probably going to be worse than I think it is.