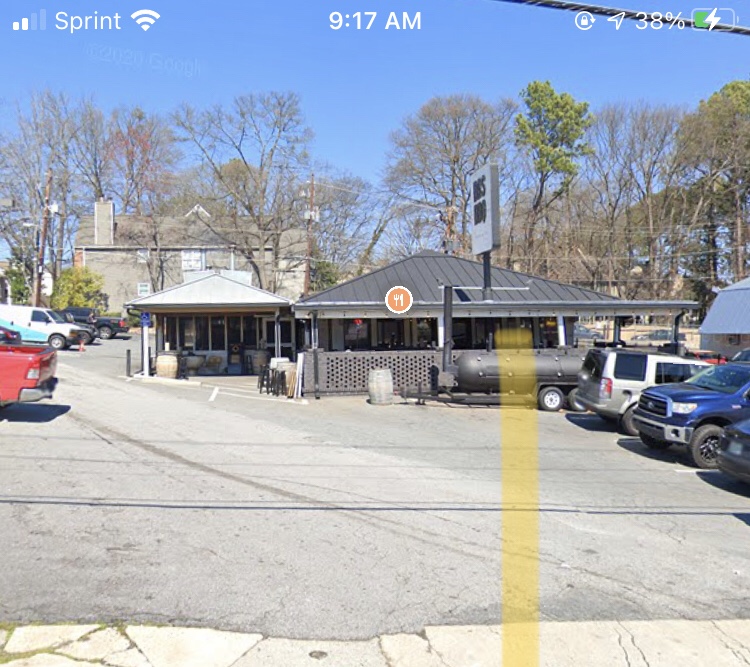 Ever since I read an article in 2015 about Pizza Hut’s architectural legacy I started to notice these old Pizza Huts in the wild. The author of the article never spoke to any architects who converted them, they just observed through a camera lens. I knew the architects of this Pizza Hut conversation project around the corner from my first condo, so I thought it would be interesting learn more from their perspectives about how he converted the Pizza Hut on Collier Road into a barbecue joint.

After two months of beating down doors with several emails and phone calls to Gamble + Gamble. I finally got a hold of Mike Gamble on a random Tuesday. I had called every one of his seven lines till he got sick of all the phones ringing in the office and picked one up. Mike was glad to hear from me though and put me in touch with his project architect, Will Gravlee, on this project to get some information.

“I was working side by side with Mike [Gamble] and the Das BBQ crew on both their 2017 Pizza Hut conversion location and their newest location in the old Harp building on Memorial Drive” said Gravlee.

“We met Stephen Franklin, founder of Das BBQ at a birthday celebration for a mutual friend in 2016. He was serving his bbq at the event and we all hit it off immediately. Our company logo features a keyhole. Stephen also identifies with the keyhole symbol for his own reasons and so our collaboration felt very serendipitous” Gravlee said.

The first thing the design team would have to do was remove the Pizza Hut ‘hat’. Gravlee said, “Along with removing the hat, we strategically removed a portion of the roof trusses inside to raise the ceiling height in the dining space. We worked closely with a structural engineer to ensure the roof was structurally sound throughout the process.”

All of the trapezoidal windows, the second of the two tell-tale Pizza Hut features, were all removed and were replaced by square and rectangular windows. I often wondered how good a deal Franklin got on this building because they gutted it both in and out.

Gravlee went on to add, “The new custom ‘woven’ brick wall, outdoor dining area, and smoke house all transformed the hut into a new, unique BBQ Theatre for cooking, dining, socializing, and entertaining.”

Unfortunately I was unable to get in contact with the owner, Stephen Franklin. I really did try though, I called both locations, DMed on social media, emailed—squadoosh. I even dropped in once at the Collier Road location and struck out.

I did manage to dig up a quote from an interview Franklin did that relates to the building construction itself. He was asked “If you had to go back in time and start over, would you have done anything differently?” Franklin said, “I would have approached the building permit process a little differently. The building and renovation permitting and inspection process in Atlanta is brutal. But now we understand the system and that’s a good thing for the future.”

One thought on “The Second Life of a Local Pizza Hut”