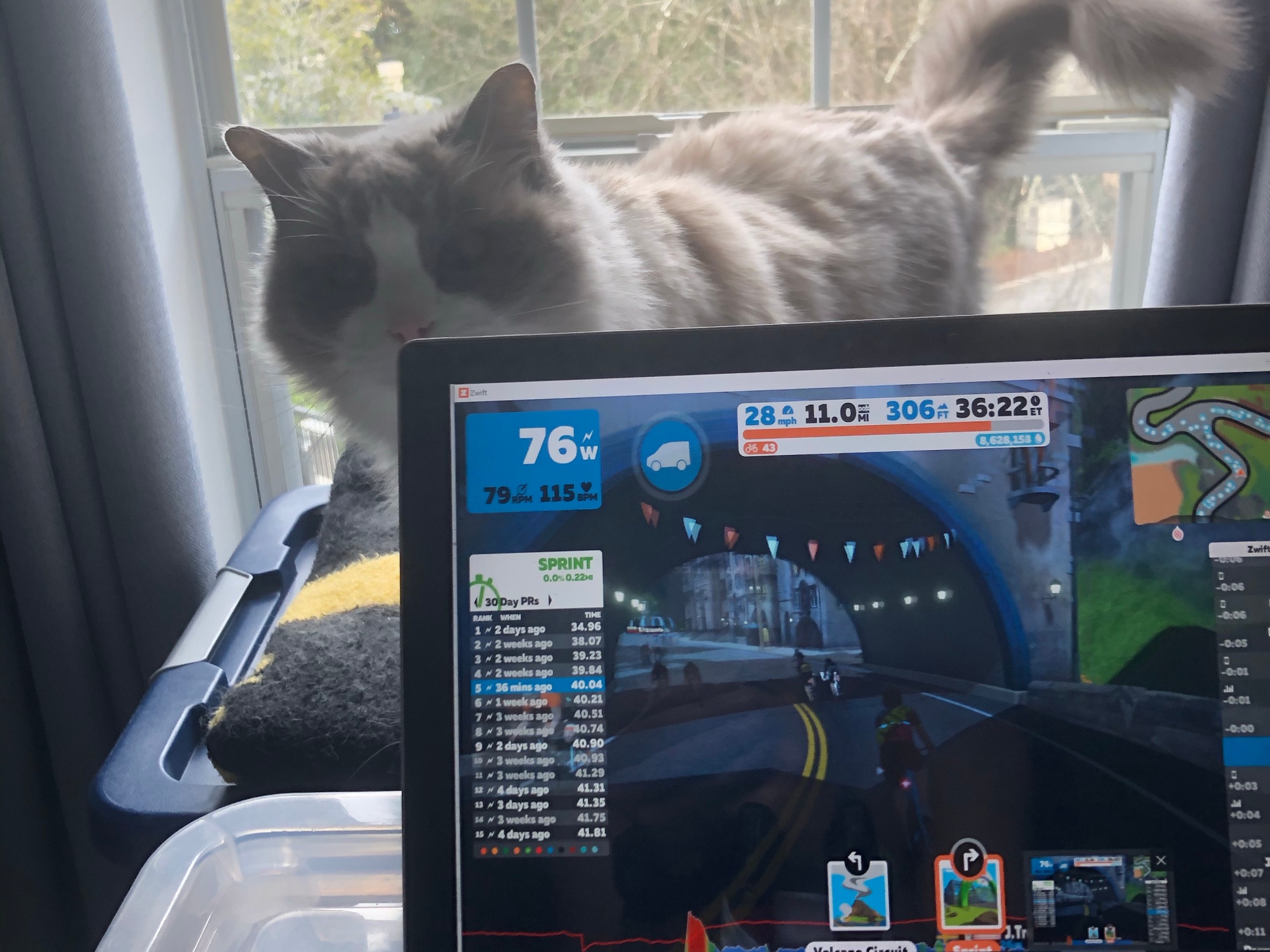 I always did my cycling outdoors until October 2017 when I was hit by an SUV. At that point I bought a Wahoo Kickr to move indoors to ride on Zwift. In a three-story 2,400 square foot townhouse I used to share I couldn’t set my bike up anywhere without the other person I lived with complaining.

I first started off being tucked in the corner of the dining room right against the wall…well she didn’t like that because “That’s where we eat not where you train”. Okay, fine. So then I moved into the living room in front of the TV, I’d just breakdown the bike (hereinafter known as the Mistress) every time I was done. Well, she didn’t like that either. The Mistress was always in the way of her watching her Chicago Med and Chicago P.D. she had stockpiled on the DVR. Newsflash, those shows have been recycled for the last 40 years going back to NYPD Blue and ER, they sucked then and they suck now.

Everywhere I set up shop it was like it was a major inconvenience to have to look at my Mistress. I secretly knew the other inhabitant of the townhouse was jealous of her. What can I say? No matter how much I ride my Mistress she never complains.

So I went up to the third floor in search of a place I could call my own since the first two floors were a no fly zone. It was a royal pain in the ass carrying a bike up two flights of wrap-around stairs. There was an added bonus of a baby gate separating the second and third floors because my former mini Aussie is a psycho when it comes to other animals. But yes, the baby gate certainly upped the degree of difficulty in moving the bike. I used to cringe when I’d bang my Zipp race wheels on the walls or door frame trying to get over that damn gate.

I was told by the old ball and chain to wedge my bike in a 2’-3” wide space created by the wrap-around stairs, which wasn’t enough space to even hop on my bike. I couldn’t set up in front of my TV because “That’s my Beachbody workout space and I need to be able to move around.” I had to settle for the back corner of the room where I had to duck my head because of a slanting ceiling from the pitched roof. Out of a 2,400 square foot townhome I was relegated to the worst spot in it…like the late great Rodney Dangerfield used to say, “I tell ya, I don’t get no respect, no respect at all!”

…but I wasn’t alone up there, as my mom’s favorite Michael Stanley song goes “Misery Loves Company”. The third floor was the penthouse suite and had all the luxuries and amenities two spoiled, free-loading felines could ever dream of. It was their safe space away from Piper the psycho where they could let their guard down. So in my move to the third floor I gained two new training partners.

My cats are old girls now, Cincy is 14.5 and Tinkerbelle is 17. They’re both rehomed rag dolls, so they’re the best cats you can ask for. They love everybody unconditionally, even my narcissistic, self-centered asshole of a brother…and he can be hard to love most days because he’s usually screwing you over.

For most of their lives it’s just been the three of us, so we have a strong bond. I can literally speak their language, me and Cincy have full blown conversations in meows — it sounds a lot like the scene in Baseketball where Matt Stone and Trey Parker keep saying “Dude” back and forth, but it changes meaning because they’re constantly changing their tone and inflection when they say “Dude”. Yeah, so instead of “Dude”, replace it with meows. The three of us have a mutual understanding, which is why I’ve come to love my training partners.

Anyone that owns a cat knows they know when they have your undivided attention, that’s why they always bother you when you’re trying to take a shit. They just fucking know, it’s an evolutionary trait in the process of feline domestication that has been passed down since the inception of the detached shithouse dating back to medieval times in feudal England. Riding your trainer is just an extension of that. Those two fur balls know when I was clipped into my pedals and I wasn’t going anywhere. So once that crank started churning they knew now was the time to make their move.

They would first start to circle me as I rode, like sharks congregating in water that’s been freshly chummed. They’d meow as they went round and round. Their meows are actually louder in old age because they’re losing their hearing. Tink has this lumbering waddle you figure a stegosaurus walked through a forest with, but she’s also like a T. Rex in that her vision is based on movement.

I’d try to tune them out as best I could, but they always want my attention. If I got off the bike to pet them so they’d shut up they’d scatter across the room like roaches when the light goes on. Eventually they’d spot the opening below my crank and decided to be the feline version of Indiana Jones and go through. They didn’t make it. Most of the time Tink would get hit on my downstroke she’d scurry away, but she would be back. They always come back.

About 15 minutes into a ride they’d hop on the adjacent love seat and sing to me in a rhythmic symphony. They’d sit right on the back and meow incessantly wanting to be petted, but they were just out of my reach. So we would dance this dance every day, and Saturday’s were always three to four hour rides…and they knew it.

Cincy goes through these spurts where she’s super affectionate, so when they happened during my rides she’d want my undivided attention. It was as if she was saying “I demand to be petted now, bitch! You can’t ignore me! I’m coming over there!” She’d walk across the TV trays over to me like an acrobat on a tightrope. If I wasn’t on the aerobars she would try to hop on them in an attempt to lay across. She assumed it was one solid piece under that hotel hand towel and would struggle to not fall through once her paws found the gaps in between the bars.

The three of us would move out of our townhouse and into my new condo where we would finally have our very own pain cave. The triathlon gods were smiling down on me.

I knew my training partners would be in and out of the new pain cave, so I stacked some Rubbermaid bins and threw a wool blanket on top as cats love to be high and the wool was comfy. There Tink sleeps curled in a big fuzzy ball as I ride, often basking in mid-day sun as the stacked bins sit in front of the window. When she wakes herself up she stands and meows at me for two minutes while locking her eyes with mine with the thousand yard stare you’d get from a Vietnam Vet. And just like that, she’d curl back up to sleep for a few more hours until it was time for Greenies.

I know they won’t be around forever and I’m prepared to let them go when the time comes, but I will certainly miss my training partners when they’re gone. What I won’t miss is having my bike in the same room as the litter box. Tink lacks the basic feline instinct to cover up her poo after she goes so I have to go over to scoop it right away if she uses the litter box while I ride otherwise the entire pain cave smells like shit.

3 thoughts on “The Best Training Partners You Could Ask For”