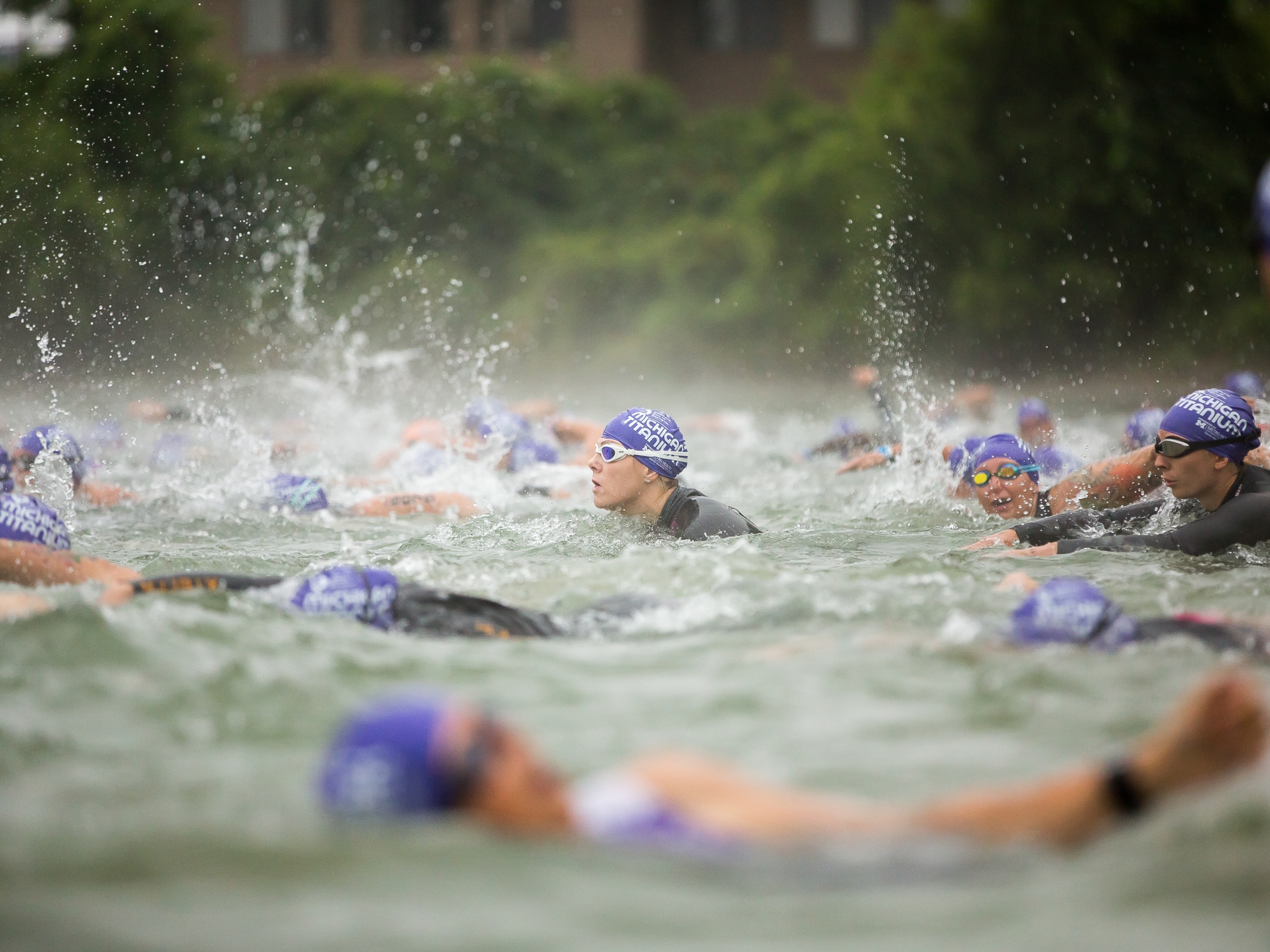 In the world of ultra-distance endurance racing there’s IRONMAN and then there’s everyone else. While IRONMAN continues to grow its brand, the rest of the field has shrunk. When I did my first triathlon in 2014 there were 23 non-branded full distances races. In 2020 there were only seven remaining.

There are a few causes that have led to this near extinction of the independent full. Sometimes IRONMAN made an offer and bought the race like with Vineman, ChesapeakeMan, and Beach2Battleship, and some of those races would end up being discontinued within a couple years of purchase.

The other major problem was actually two-fold. First, USA Triathlon membership had been on the decline since 2015. Next, there were low participation numbers in independent fulls. This would lead to a lack of profitability of a race, and eventually the tough decision would be made to discontinue the race as was the case with Redman Triathlon in Oklahoma.

Through all of this, Michigan Titanium has remained, one of the last of a dying breed. Given the current state of triathlon due to coronavirus they may be a little lonelier. “Early predictions are kind of looking at half the race companies not being in business next year,” co-owner Jon Conkling said.

Who of those seven independent fulls survive the next two seasons remains to be seen. If I had to make an educated guess on what races didn’t make it I’d say the HITS Endurance series takes a big hit. They already dropped their Ocala, Florida, event from their schedule, so one could assume they’re already facing low participant numbers.

I think the races that have the most space away from an IRONMAN branded full-distance event get a slight edge. Michigan Titanium has plenty of geographic space to allow them to breath. The nearest IRONMAN races to Grand Rapids, Michigan, are IRONMAN Louisville and IRONMAN Wisconsin.

IRONMAN dropping more 70.3 races in the region actually hasn’t hurt Michigan Titanium or their Grand Rapids Half Ironman. “We were nervous about it, but we’ve actually seen an increase in numbers,” said Conkling, “It helped us.” Co-owner John Mosley added, “We were actually up 23% from last year for Grand Rapids Half until all this happened in the last few weeks.”

Though Michigan Titanium draws most of its participants from the state of Michigan, the remainder comes from 35 different states and Canada. Mosley said, “Grand Rapids and Michigan are our biggest draw, Chicago is our number two — we pull a lot of athletes from Illinois.”

The city of Grand Rapids is a lot like Chattanooga, Tennessee, in that they really get behind the events of the host. The downtown area is really vibrant, the people are friendly. The city also gets about a $500,000 economic boost for hosting the race.

If you thought there wasn’t much to do in the Midwest other than drink, you’re kind of right. However, Grand Rapids has embraced that fact and earned the name “Beer City USA” because they have over 80 breweries on the Beer City Ale Trail. You really don’t have to say anymore to know I’m interested, I’d need two weeks and a daily IV bag hanging off my hotel room wall lamp just to be able to make it to all of them.

I’m only half serious about the only fun thing to do in fly-over country is drink, I grew up in Ohio and that was the only half-interesting thing to do as a young adult. Grand Rapids is home to some pretty cool museums, and if you like to do antiquing this is a good city to browse antique shops, especially for furniture.

The local media does a pretty good job at making the MiTi known. I actually found a Detroit Free Press article called “Ultimate Michigan summer sports bucket list: 50 activities you must try” and listed Titanium at 29.

One thing I do love about independent races is the price. IRONMAN Tier 1 is roughly $800, on top of that you’ve got to book a three-night stay in a hotel, feed yourself (and probably others) for four days, gas and maybe a rental car. I think I got away with spending $1,200 at IRONMAN Maryland because a) I crashed on Laura’s couch in the DC area for two nights and b) was single at the time so I stayed in a sketchy no-tell motel race night. You can get in on the early bird pricing for only $385, which is pretty awesome, plus only need to do a one-night stay in a hotel. “Doing the whole 140.6 experience is life-changing to most people,” Conkling said, “We wanted to open it up to as many people as possible.”

As for the race itself, well it’s a pretty good set-up. You’ll enjoy a quiet and calm flat water swim on Versluis Lake. It’s crystal clear water and one big bonus is all boats can only have electric motors. I personally hate the smell of diesel fuel in a race, which is why I hated IRONMAN New Orleans 70.3 so much, so it’ll be quite refreshing to not have that noxious smell burned into my brain when I think of the race.

I have mixed feelings about a four-loop run course, but it should be looked at from two perspectives. While I may personally get bored from the scenery not changing a lot, the people that show up to spectate the race get to see me a whole lot more. Truthfully, it’s better to be on the side of your fans because I know when my parents came to watch me do a 70.3 they probably didn’t even get to see me for five full minutes of a five-hour long race.

I read an interview by slowtwitch.com of a triathlete couple that were pretty elite age-groupers. Before committing to IRONMAN branded events, the woman did Titanium the year it was shortened because of the lightning. She said, “…now that I’ve done an IRONMAN branded race, I don’t think I could go back. The organization, the crowds cheering, and how special they make you feel when you reach the finish line just can’t be beat!” I can’t share that sentiment, I’ve actually started to gravitate more to independent races because they feel more intimate when I can easily see my race supporters, especially at the finish line. Sometimes you just want to take a couple steps after the finish and sit down on a curb or get a hug, which you can’t do that easily at IRONMAN events, but you can at a race like Titanium.

This season (or lack thereof) is turning into a difficult experience for race directors. “Postponing or canceling events is not anything anyone wants to do, but our athletes have been awesome,” said Conkling. “We had over 1,000 people sign up when we postponed the race [Grand Rapids Half] till next year and we’ve literally only had a handful of emails that weren’t so pleasant” Mosley added.

Conkling and Mosley were on their way to have their largest participation ever for MiTi. “We’ll typically be 1,700 to 1,900 people and we were tracking to be at 2,100 to 2,300 people this year,” Conkling said. That’s actually on the larger side of independent races. Conkling and Mosley hope Titanium gets put on this year, but if they have to then they’ll defer to people like they are now with the Grand Rapids Half.

The coronavirus and economic recession that will accompany it will take its toll on triathlon, but at the end of the day Michigan Titanium plans on being back next year. “The full isn’t a huge money maker because of the costs involved,” said Mosley, “It’s just something that we think needs to be out there — there needs to be independent fulls for people who don’t want to spend $2,000 to $3,000 for that experience or maybe people have done the IRONMAN thing and want something different.” I happen to be one of those people who is one of the latter, and I plan on adding Titanium to my race schedule for 2021 or 2022.