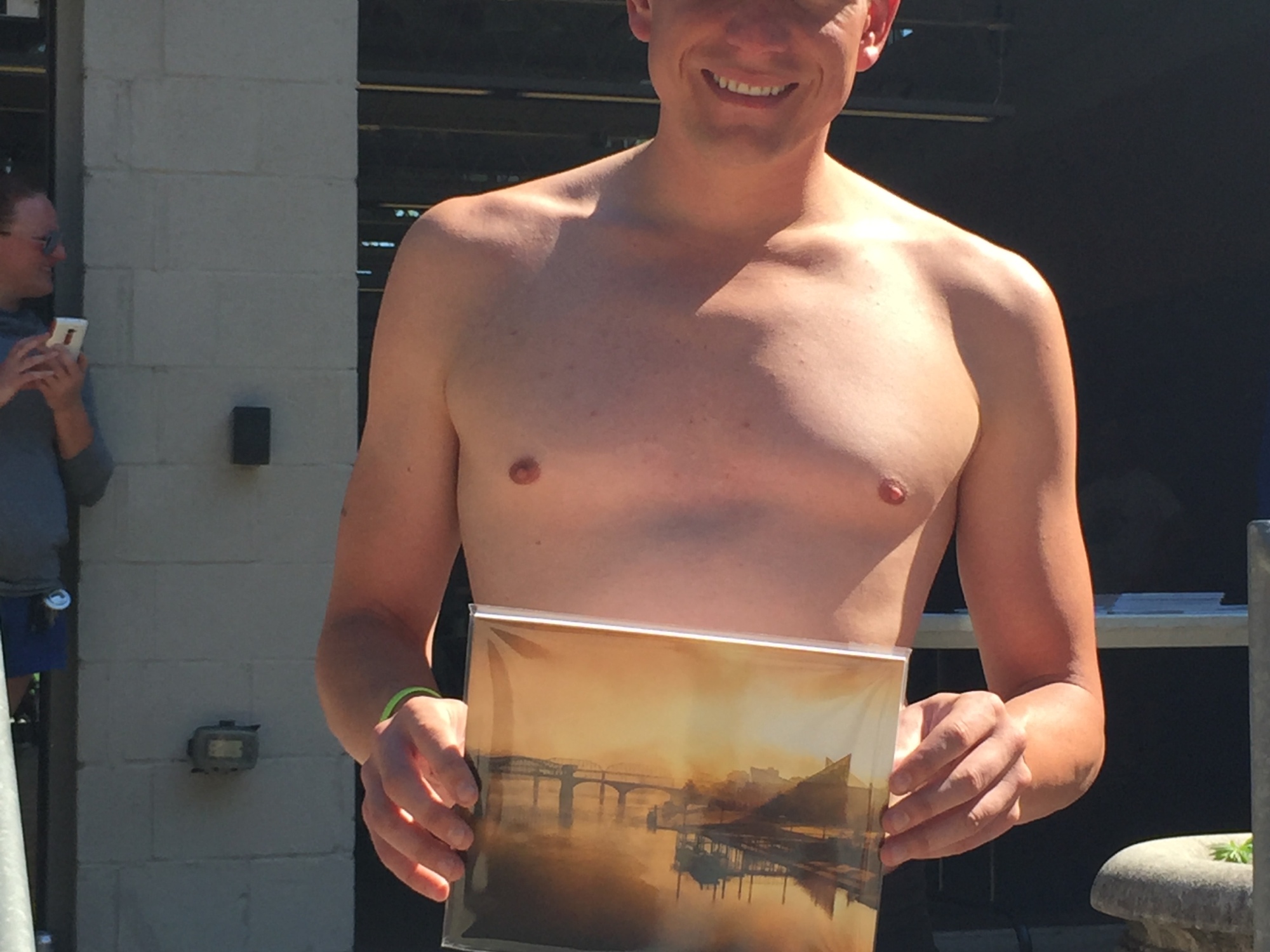 I had an early start to race day because I was traveling there the morning of, so I was up at 2:00 AM. In fact, it was so early my neighbors were still up having their party when I started making breakfast.

I had opted to take the Monte Carlo up to Chattanooga in lieu of the Nissan Leaf. Traveling to the race the morning of is a lot to put on the line with an electric car, so I sucked it up and took the car with no working air conditioning.

I arrived at Coolidge Park at 5:45 AM and only had to pay $5 for parking the entire day, which was a steal.  The race check-in process was pretty smooth. There weren’t a ton of people racing; I think it was probably less than 300 people total, three of which swam for me at Atlanta Rainbow Trout. The race organizers used school buses to shuttle us up stream to the starting point for the 4.5 mile race.

All of the swimmers had to walk down a concrete boat ramp for the in-water start. It just dropped off suddenly and I cut the bottom of my toes on my left foot. I couldn’t examine the damage being in the river, but I could feel the sting from it. Whatever, it’s something I couldn’t deal with at that moment. I was more concerned about overheating during the race because the water was so warm.

Whenever I compete in an event like this, I’m always listening to “Bonecrusher – Never Scared” in my head because the beat is slow and repetitive. It gets me through the race and into a zone where I’m functioning on autopilot.

Long distance swims do not function in the same manner as a road race would. Everything unfolds much slower. Even the faster swimmers are topping out at a little over 3 mph average. For faster swimmers, it all happens in a few stages over the first 1200 yards of the race.

The first 400 yards is where the faster swimmers start distancing themselves from the rest of the race, separating the wheat from the chaff so to speak. At about 600 yards, everyone is starting to see who is sitting at the table and you’re all jockeying for position. By about 1200 yards no one within this top group is really jockeying for position anymore and everyone settles in for the long haul.

I ended up negative splitting this race, which means the second half was faster than the first. The first half of the race I averaged 1:10/100 yards and the second half I averaged 1:05/100 yards. There was a swimmer I caught at 3000 yards out. He was all over the place because he either wasn’t sighting or had a lot of trouble doing it. I know I had trouble sighting, but that’s because we were using the dark green metal depth markers as the “sighting buoys.” Unfortunately, they blend in easily with everything around the area.

When I saw I was coming up on the three bridges, I knew I had about half of a mile to go. I made sure to go strong to the finish when I reached the Walnut Street Pedestrian Bridge. I ended up eighth overall and first in my age group with a time of 1:27:37 in the 4.5 mile race. I got an awesome photograph instead of a medal. The cuts on my toes burned; I just cleaned them and sprayed all of it with liquid bandage.

Now that I had a nice, long swim for a warm up…it was time to keep working out! I tried to ride the Ironman 70.3 course, but I kind of got a little lost. Things didn’t look familiar to me despite being there 3 weeks earlier (and none of the markings remained from the race). I put in a good 41 miles and then needed to get in a run. I went over to the other side of the river to run on the Riverwalk and then back over the Walnut Street Bridge. It was at least 95 degrees Fahrenheit when I finished. I just took off my shoes and walked into the fountain at Coolidge Park since I was parked in the lot next to it. I probably got some stares from parents, but I didn’t care…shit felt amazing.

After my fountain shower, I got a snow cone! I probably haven’t had one in at least 15 years; that banana colada hit the spot. Then, I hit up a bar next to the park. I had a beer called “Peanut Butter Jelly Time.” It was like drinking a PB&J. I don’t know how I feel about that? I also had a margarita while I was there, but this bar added their own twist to the drink. The cucumbers slices took a little bit of the bite out of the tequila and left it slightly sweeter.

The race took place during the week of the River Bend music festival. I’m not into country music, but I’m down to enjoy any party. I just couldn’t stay any longer; I was exhausted from being up so early and still needed to drive 100 miles to get home.

Pro Tip: When the air conditioning is broke in your car and you need to keep your window down for the ride, wear a sun sleeve on your arm that’ll be out of the window. It’ll prevent you from getting burned on one side for the whole ride and won’t leave any mess from sunscreen on the door of your car.