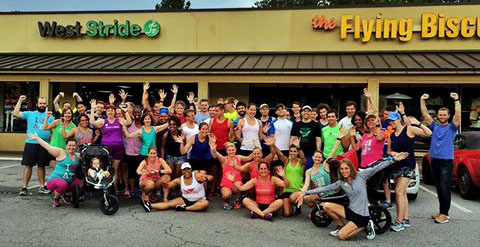 I’ve always found Strava to be an interesting tool. For the longest time I only interacted with people I knew. Eventually, I started joining different groups. Not long after that, I started following other people in the groups I belonged to and some of them would follow me. One day I figured I should make my way out of the online world and start meeting some of these people.

I’ve been living in Atlanta, Georgia, for the last five years. There are a lot of people that I follow from the metropolitan area and many of them mutually follow me. I knew a lot of them did group runs or group rides at different places on different nights, so I thought, “Hey, why not get out there to some of these, it beats training alone tonight.”

I started making it out to West Stride group runs on Wednesday nights after work. At least twenty of the people I follow on Strava run there, so it was nice to start meeting everyone. They’re all really cool people. Plus, they do a run at Red Brick Brewery at the end of each month and that’s pretty awesome. Who knows, maybe these runners might convince me to start doing more road races.

I also started riding with Atlanta Cycling more often. I had done it a few times in the past with friends from Atlanta Rainbow Trout. I realized that since my new home is on some of their marked routes, doing their group rides on week days would be pretty easy. So I’ve ended up going out there once or twice a week and hanging out with more people I’ve met through Strava.

There are people I’ve ended up seeing on Strava fly-by’s of some of my activities I followed but never met. I ended up commenting on their activity and said we should go ride or run some time. I’ve formally met three different tri friends I now work out with this way.

I guess the point I’m trying to make is meeting the people you follow is something you should try to do. You’ll make a few new friends and may end up with some training buddies out of it. At the very least you’ll have fun on any group rides or runs. If Strava is built to be a social media platform, you might as well start living the social aspect.