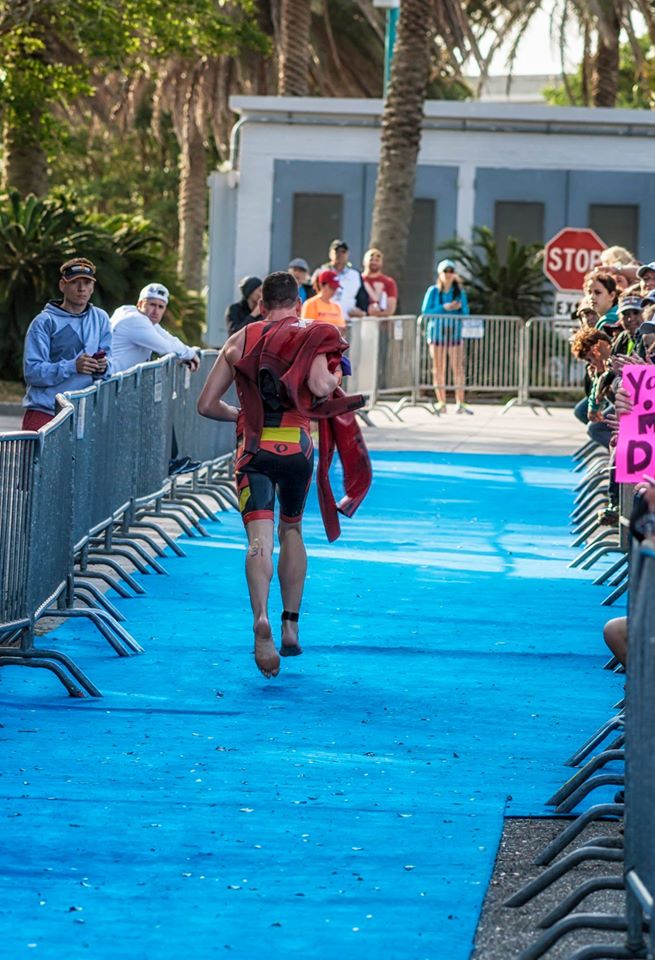 I signed up for this race after discovering a few of my swimmers on the Atlanta Rainbow Trout were doing it. Unfortunately, I wasn’t able to make this as long as a trip as I would have liked and just was there for the weekend.

I knew the weather forecast for the event well before hand. I had been eye-balling it every couple hours during the week proceeding the race hoping the weather would be in my favor. Eventually, the forecast of rain had went away, but the 22-30 mph winds had not changed. Personally, wind is the last thing I wanted to race in. I would have even chosen snow.

When I woke up, I was in the middle of a dream where I was late for the race. I popped out of bed and started scrambling. I could feel my heart racing until I saw the time on the alarm clock. Talk about some instant relief. I packed up everything and headed off to transition. Personally, I feel if you come early, you should get a parking spot closer. That’s not how it worked on Sunday. I ended up at the far end of the airport lots. It just made for a couple long trips back and forth between the car and transition.

It’s just about time for the swim start. I was cool with the time-trial start, but the swimming conditions were pretty bad. It was extremely choppy. Race officials delayed the start to reposition the buoys. I had difficulty sighting the buoy markers or pretty much anything else for that matter. I thought the swim felt fine, except when I glanced at my watch to see my time as I ran into T1. I saw it was over 30 minutes, which is really bad for me. I anticipated being somewhere in the 24 minute range. Later, I found out that it wasn’t just me who thought the swim was brutal. I still managed to be 3rd in my division and 42nd overall. My buddy Elliott ended up being first in our division.

The bike is where things started getting really interesting. The wind speed was picking up as the day went on. The now 25-28 mph sustained winds out of the East were just soul-crushing. It felt like I was riding against a wall. A few times when I glanced at my Garmin I saw speeds in the 14 mph range. At that point I realized my goal of about 4:40 was not going to happen that day. Not only were the headwinds bad, but occasionally there would be a strong crosswind that felt like I was going to be knocked off my bike. I think after the first one I started to carry my weight a little more on my left side. I also think that a lot of the soreness I had in my back on the run and the next day was because I was clenching onto my aerobars for dear life the whole ride. On the way back we had tailwinds. When it’s at your back…you barely feel anything. I ended up taking advantage of the situation, but it’s hard to stay on the aerobars when the streets you’re riding on are a joke. Yes, Louisiana, your roads are much worse than my native Ohio roads. Any potholes or road damage were marked with orange paint that didn’t stand out very well, which resulted in flats. As I finished up the bike, I realized with the tailwinds aiding me, I had made up some time towards my goal. This race is flat with the exception of bridge on/off ramps closest to transition. You’re going to be bored because there is no interesting scenery. Most of the area is run down or swamp land.

I’m starting the run, I’m holding a great pace. I’m at 7:30-7:40 per mile for the first 6 miles. I thought to myself, “The wind isn’t going to affect the run much at all, you can still crack the five hour mark.” Well, when I made the turn at the turn-around I was promptly met with a blast of wind that felt like it could stop me dead in my tracks. I then understood the whole “wind-aided” thing when it comes to track & field. Slowly my pace starts creeping up and I realized even getting under five hours may be a tall order today. At about mile seven I feel my back tighten up and becomes more painful as I pushed on. At mile ten I honestly considered throwing in the towel. I was just so sick of fighting the winds all day, but I managed to keep it together for the remaining 5k and still had a decent half-marathon time. For my first 70.3 of the year my 5:03:28 was a strong finish.

The finish used to be in the French Quarter which sounds awesome, but now that everything is at the airport there’s nothing noteworthy about this race. I wouldn’t do it again, it has no appeal to me. Even the medal sucked; it was the New Orleans skyline and a riverboat. Let’s go there…anyone outside of Louisiana can only name the Superdome (which isn’t on the medal). I thought it would be a lot better had they gone with a fleur-de-lis because it’s synonymous with New Orleans.

Everything about this race seemed like it was low-budget and squeeze as much money out of it as possible. There was little swag at the expo and what I did get sucked. The airport is in the hood—there was dude posted up slinging rock on the corner 2 blocks before the entrance. I bet this race gets the ax in the near future. If I recall there were 1,600 people racing when Ironman typically has a limit of 3,000. The French Quarter wasn’t all that interesting either. I saw some art I really liked, but I never carry enough cash to buy it off people selling it on the street.

If you can you should pass on this race and find another 70.3.

Swim (inside the marina)